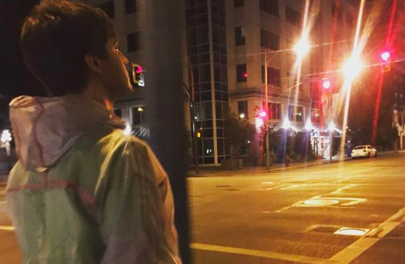 Tilting up to bluelit bottles
like organ pipes and gulping
the air, the wonder of five
hypothetical storeys, dread
will fill us up entirely
like sub-sub-contra C.

First, ghost variations
strike from the proscenium,
hold us down under the pedalboard
as the starkest stripped oaks lurk
through the semi-transparent
scene come alive.

You’ve become a regular
in my prayers, a spur for
my superstitions, and the on-set
tension just erupts and rebuilds.
The pose – prostrate, bloody, ashen,
riddled with gravelly wounds and
bruises not to be taken at face value –
is tired, not as romantic as you think.

Treaties and truces are drawn up
around your outline, we split up,
literalists against dreamers,
word becomes flesh-eating.

Cathedral exterior the uncanny non-
colour of a subway rat or a night terror,
timeless bleak upon bleak.

I wrote four thousand haikus on my deathbed
with the Pine Tar Game looped for atmosphere
meditating on the balladeer’s revenge,
on the dissonance of the non-believer
suspended only by salix immersion,
on madness and utter lack of limitations,
as four histories fell asleep on the couch adjacent.

I broke the hour record at the age of twenty-two
In between pianistic sing spells, renowned for being
slow to speak evenly, in Klemperor tempi.
A Terminalia fit for El Beatle becomes me
Just ask anyone here they’re all real.
Pommery with something not for human consumption
Imbibing twilit disappearing grandiosity.

I’ve upheld my status as snob of first wave
chemsex lit till the bitter end, regaling the room,
seeing platinum choucroute and catching
seven dials pangs in long blinks.
Four or five decades spent in bars
and not much to show for it.

Keep chanting: a love supreme,
it’s gonna be alright, these things
I’ll be until I die.

The New Thing, the non-believer
Il Campionissimo, all style, speeding up
in pilling wool and peaking
on either side of the war.

The race won’t be blessed this year
but this is our post-Fascist future:
by hook or by crook, rushing
out of the dark ages.

The friar confessed a confession,
told of slow poison, evening the score,
finally closing the gap.

THIS POEM SHOULD BE READ LOUD!

Every night out we rehearse
“Play only old ones tonight. Only old ones.”
The songs we punch are redeeming,
not least B52 – I wouldn’t forget you, Bruce.
Minds now blasted with the lingering red
glow of Volpe’s, not to mention all
the potential of Dino’s,
For 2:27 we run this place.

Luke Bradley is a writer and cultural critic in British Columbia, Canada. His work has appeared in Vice, Racked, Esquire and several other publications. Twitter: @Sloganear

The Squirrel Incident by Jenya Doudareva

A dead squirrel was laying in the middle of the sidewalk. Cause of death – unknown. Folks running around on their morning business in sombre palette suits, as per [...]