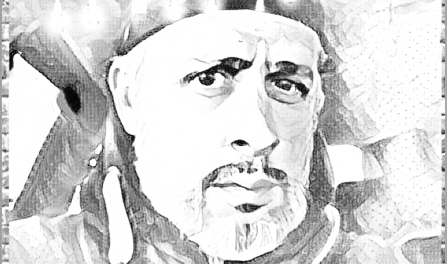 I was trying to listen to the facilitator but the girl in the row in front of me turned and stared at me until I made eye contact with her.

“Jesus,” she said. “Listen to this guy. What’s he written? All he knows about ‘Fiction’ (capitalized) is that it’s hard to spell.”

I nodded and she continued.

“No one can tell you how to write. They just want you to pay them to listen to their opinions of their own opinions.”

“So why are you here?” I asked. She didn’t even have a notebook.

“To make fun of people like you” she said. She was so quick I knew she’d prepared that in answer in advance, rehearsed it, and then held it close until just the right time.

“What do you know” I said, turning away. It wasn’t a question.

She leaned up against me, and spoke, sotto voce, and I could smell her hair – something faint and pleasant, and with that a little bit of mint and tea on the warmth of her breath.

“I know,” she said, I know – that you have to sit alone in front of the keyboard and forego all the pleasures of youth. You have to sit there until it comes, if it comes at all. If it comes you type, and in the typing leave them along the banks of the river in 1993 when it rained for a month and the levees finally broke. Tell them how we sandbagged all through the night and into the next morning until our backs and legs gave out and we stood their heaving when someone said, ‘I know we’re losing. What I need I need to know is if we’ve already lost.’ Tell them how things came down the river. The roofs of houses, the sides of barns, dead cows and live trees and even empty boats too. (Now that’s a laugh.) At last, a baby’s coffin came, small and white against the muddy river. The flood cast out the most innocent and paraded them past us on the water. That’s how much nature cares. If you sit in here some pearl-clutcher is going to say how Hemingway wasn’t really very good and there’s too much of the word “fuck” in someone else’s story because there is always someone like that. Better you should sit down in front of the keyboard. Write it all down; catch it as it comes – unless you are just here to hear some guy talk about himself.”

I nodded. The instructor, with eighty of my dollars, was speaking now of the “objective correlative” and had said “What I try and do … “

“There,” she said, nodding towards the objective correlative. “Now you have an MFA. But remember: Obey the muse, not the master. You have to sit at the keyboard and give up all other things. You have to sit there until the river brings you something. Sit and be silent and alone.”

I stare at her now, but she is looking away from me around the room at the other attendees, all of whom listen to the facilitator with their heads down and fill their notebooks with line after line of cursive handwriting, beautiful, dense, and impenetrable.

The Things of the World

I see a woman on the bus wearing her anger like armor. She’s so mad she shines. I won’t say anything to her, not even “hello.” I won’t even nod. To acknowledge her would be to concede something, in some way, to her anger. “You have every right” isn’t something she’ll hear from me. She has no man in the house, no man’s income. She has lost nothing; it’s just that nothing ever came to her of whatever she thought she would have. Not for her the things of the world.

We drive on by a boy walking up a hill. His lips move, but I can’t hear what he’s saying. I know him though, or more appropriately: I know of him. He’s talking to himself. By twenty-one he’ll be sleeping outside, living off of bottle and can returns. He’s one of those ghosts drifting along the pavement. I don’t care. I have taught myself indifference. He can have nothing so that I can have not much.

I live with my grandparents now, an old couple still holding hands and active in their church. They pray for everyone. For me they pray for wisdom, so that I will turn it around, but when they’re alone they pray for money, just like everyone else who prays. Nothing they ever learned prepared them for the less that has come in place of more. Here’s some advice our imaginary Lord hath us given all: Quit praying. Nothing is coming. Imagine that and it will be so. That is the one and only honest revelation there is.

The last time I ever ride the bus I get out one stop early and walk home. I follow that boy up that hill, trying to hear what he is saying. I get too close for him to bear and he hunches over and speeds up. I imagine that I look like a street-wise exorcist, chasing off a reluctant spirit, a beaten devil, and that I seem crueler than what it is necessary to be. But I do get close enough to hear him speak and it is a rhyme, a chant, an incantation that he whispers and his words run just so:

There’s so many of us

Why are there so many of us

Why are there so many of us

Because there are so many of us

Because there are so many of us

There are just so many of us

There are just so many of us

I hear this and like a spell made to circumscribe a place either sacred or profane it backs me off, chases me away down the hill to my grandparents and their prayers for matching numbers on printed slips. I am now become a shade, the shed skin of the serpent, just another prophet of regret walking the endless miles of cracking and weedy concrete, a thing of this world but no longer in it, just like all of the too many of us.

The Light From the City

She pointed her finger at a spot on her head just behind her ear.

I think I understand.

In the light from the city through the rain on the window and half-drawn blinds I see a rivulet in shadow profile that runs down between her breasts to follow with my eyes, to trace with my fingertip, to kiss with my lips.

“Be with me in this half light,” I tell her. “Kiss me back hard. Let me feel the heat of your skin against the heat of mine, like sun on sand. Let me breathe my name upon that slow-falling water and feel your spirit rise.”

She is blue eyes and black hair. I kiss her back when she kisses me. We share whiskey kisses and I can taste the taste of her last cigarette and feel her mouth so soft and I am sorry I have to go. I have looked out a window for a long time and watched life go by now I am finally on the outside, running.

It rains outside while that light from the city keeps us a little longer from the next day. All things are held in abeyance. The motion of celestial bodies, the rising of the sun, the measure of time, and the rise and fall of tides too. Nothing moves, and if we do not speak there are no prophecies to answer to, and with silence even our confessions are suspended.

Steve Passey is originally from Southern Alberta. He is the author of the short-story collection “Forty-Five Minutes of Unstoppable Rock” (Tortoise Books, coming in October 2017) and a two-time Pushcart Prize nominee for fiction. His fiction and poetry have appeared in more than forty publication worldwide, both print and electronic.