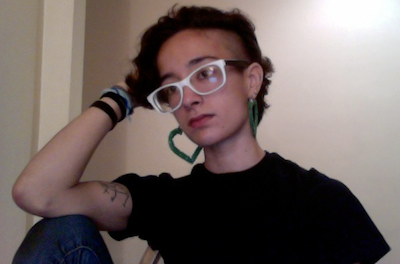 all the landmarks of my childhood
become a toy town, a diorama
of bad decisions. the places I grew with
wrenched from me, given new purpose.
an audience biting its collective nails
before computer screens, hitting refresh,
hitting refresh. the toy town is full
of tiny, moving figures – they pass letters
at the mall where we spent
an entire day to prove we could,
destroy the evidence in a dumpster
minutes from where my mother sleeps,
and on an island where once, smoking
a cigarette, I didn’t kiss a girl
but should have, they dump her body.

Cassandra de Alba lives in Massachusetts with two writers and a cat who won’t stop hitting her. Her work has appeared in NAP, Illuminati Girl Gang, Drunken Boat and Strange Horizons, among others. She’s read poetry onstage in at least 12 different states, but still doesn’t know how to ride a bike.

The Squirrel Incident by Jenya Doudareva

A dead squirrel was laying in the middle of the sidewalk. Cause of death – unknown. Folks running around on their morning business in sombre palette suits, as per [...]