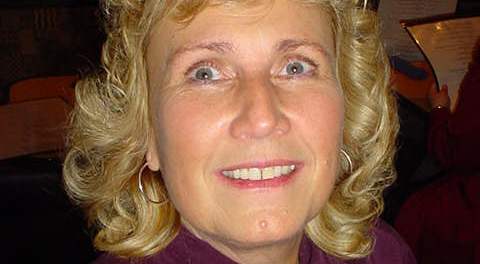 Carrying a Starbucks Venti with double cream down the steps, he trips, hits his head, and the coffee spills out into a small brown river. Tiny figures—maybe faeries—skate across the river, the blades on their skates flashing white silver in the morning sun.

It was a long fall, and he relives it in his mind—children cheering on a playground, a white dog barking, and innumerable cars with horns crackling. He wants to believe he is a prophet with a message of hope, but he continues to fall, long past the matrix of belief, past any exit door, and into a crumpled bed. There is a ladder propped against the bed, and he climbs at the speed of moonlight into a cool city night of neon overtures where he stands on a ledge—wingless, defeated, and filled with astonishing despair. He sees a rocking horse below—as small as a tiny figurine in a child’s toy chest—and he falls toward it, knowing he will not land in the safety of its saddle, but content that he will know heaven when his head and heart hit the pavement.

A young woman carrying a purple orchid stares at him. She has a puzzled but intriguing look on her face. She seems almost like a flamenco dancer, and he can imagine her fingers moving swiftly across the castanets and her body like a magical flame within the dancing.

“Don’t we all,” the man says, lifting him up, brushing his coat off, telling him the coffee stains will probably come out.

“You’ve got a nasty one there,” he says.

The guy points to the sky. “See the sun?” he says.

He looks up. Someone on the sun is waving to him.

He feels his blood moving as if in a trance. Somehow he has lost a shoe and one of his socks in down. He reaches for the shoe.

The woman with the purple orchid smiles at him, making him feel tremendously lonely.

The guy pats him on the back, moves on, and the woman, too, moves away and crosses the street as the white hand of the signal appears. He sees something he thinks is a skyline but might be a flight of large birds. He steps into the smog and the city noises—more noises than he remembers—and all sounding metallic and lost.

He looks down at his feet, his shoes in place, laces tied. He runs his hand through his hair, straightens his tie. He feels his head throbbing and wonders if he has been shot by an arrow, and if they X-rayed his head, would there be a piece of the shaft stuck in his skull. He wishes he had somewhere to go that mattered to him. He remembers the woman with the purple orchid and imagines that she has entered a bar and is drinking cognac. The cognac is fruity and soft, and the woman becomes lost in her own haze of illusions. Her eyes burn bright and hollow like stars. The purple orchid closes in the dim light of the bar, and the woman orders another cognac that she will drink in silence.

The man sees himself reflected in a shop window. The stain on his shirt looks like a small brown boat sailing across his heart. He is too weary to start his life anew.

Christina Murphy lives and writes in a 100 year-old Arts and Crafts house along the Ohio River in the USA. Her stories have appeared in a range of journals and anthologies, including A cappella Zoo, PANK, Word Riot, and The Last Word: A Collection of Fiction. Her fiction has twice been nominated for a Pushcart Prize and was the winner of the 2011 Andre Dubus Award for Short Fiction.